At the still point of the turning world - Just do nothing... 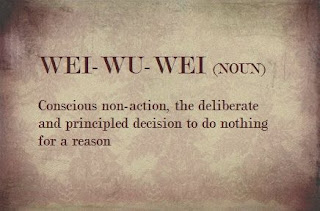 JUST DO NOTHING I have just been reviewing some of the posts I have been alerted about on various social media platforms – mainly Facebook and LinkedIn and I am conscious of the massive reaction there is/was, particularly in the early days of the current pandemic crisis. The thing I notice about it all is that the core message is EXTROVERT! GET OUT THERE! – So, repeated messages were in the nature of “ get out there and get going! ”, “get stuck into the corona-spirit-shadow”, “Writers, get to writing, painters get painting and share online ”, and I must confess that my earlier post was of the same tone – even though I was suggesting a return to introversion, my messages still carried an expectation of work, of achievement, of “meeting the challenge”. Yet, the experience of the patients who have continued to work with me online was different – I was repeatedly hearing concerns expressed that they “weren’t doing anything” – “I know there are all these things I could be doing
Post a Comment
Read more

The Sage King and The Rainmaker 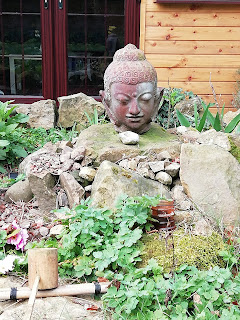 The Sage King and The Rainmaker I consulted the I Ching yesterday morning - there's nothing unusual in that, I have consulted the I Ching on and off when needed or just when something inclined me to for the past 45 years or more; and more or less since the beginning of the current crisis, I have done so on an almost daily basis. Now, I must admit, I first discovered the I Ching in the Seventies through popular culture, however, I soon discovered that Jung had written an introduction to the first translation to be widely produced in Europe and that he continued to consult and study it throughout his life. "having performed his duties and isolated himself from the world . ..." So, I consulted the I Ching yesterday and obtained Hexagram 17 Following with the sixth line changing - and there, in the translation that was chosen yesterday, I read: "The sage-king, having performed his duties and isolated himself from the world..." - The 'sage-kin
Post a Comment
Read more 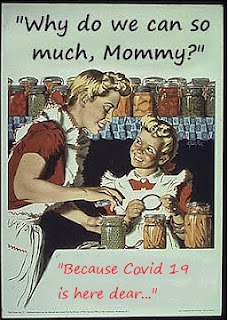 CORONAVIRUS CHALLENGES AND GIFTS COLLECTIVE DREAMING The current situation will bring different challenges and gifts to each of us, and some of those challenges and gifts may have a more universal character. One of the most commonly repeated phrases I am hearing is "I feel like I'm in a film" and of course, that's because we are living in a film. Cultural products are the artist's expression of a collective dream, and as we know, dreams do not just compensate, they also foretell - and this is why they have been looked to as sources of divination in so many cultures throughout history. This is not the same as prophecy where the voice of the deity says how it will be. YOU DON'T NEED A WEATHERMAN... No, this is more the unconscious foretelling the unfolding of events based on current trends - not unlike a weather forecast. So, writers and film-makers for generations have been producing dystopian narratives that have in some ways been fo
Post a Comment
Read more

The Sun and the Strangeness 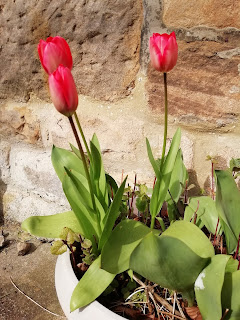 The Sun and the Strangeness The sun was back out today, although the temperature wasn't warm enough to sit out and read like last week. That didn't seem to deter the first tulips though, who didn't seem to need much encouragement to show off their bright beauty. And the Acer seems to have decided it's going to coordinate with the colour scheme... And all the other flowers continue to thrive... And now for the Strangeness... I had reason to travel into Newcastle City Centre today. I rarely travel into the city since I closed my office there. However, with the recent isolation, where I live has felt even more isolated - those of you who know it will know it's the complete opposite of the city - and I started to feel a bit of cabin fever and thought I had better get out into the world a bit. So a trip into town seemed like a good idea. Nothing seemed particularly different, perhaps the roads were a little quieter, but other than t
Post a Comment
Read more 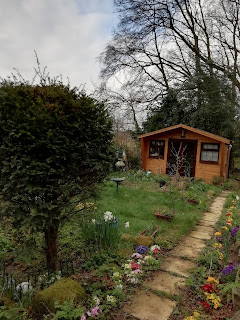 Hello Out There Hello out there, it’s a dull morning in the garden and there’s a bone aching chill in the air; last night and this morning there were flurries of fine snow and hail stones. That’s very different to a couple of days ago – for three days running I was able to sit out in the sun and read for five hours, but now at least I have an excuse to light the wood burner; although, as some of you are very aware, I don’t need much encouragement to light the stove! There is still growth in the garden. The daffodils are still going strong, as are the primroses and the first tulips seem to be bursting with anticipation, just waiting for the right time to open…. Stay well everyone and may we all find the opportunity for growth in these challenging times.
Post a Comment
Read more

Coronavirus, social distancing and the psyche of the world… 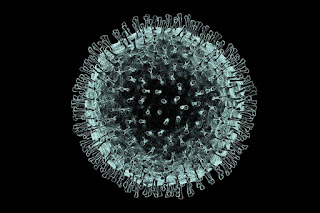 Coronavirus, social distancing and the  psyche of the world… “Even viruses have rights” David Cronenberg "People often asked Dr. Jung, "Will we make it?" referring to the cataclysm of our time. He always replied, "If enough people will do their inner work." This soul work is the one thing that will pull us through any emergency." Robert A. Johnson - Owning Your Own Shadow~ Understanding the Dark Side of the Psyche. One of the things that seems to be starting to dawn on people is that what the Social Distancing restrictions will do is force a predominantly extrovert society to turn inward, to introvert, unless, that is, we all simply settle down to endless box sets and bags of crisps – Which, I must confess is sometimes my own modus operandi when the Work all gets too much.  BUT, what if... What if the majority of people take the opportunity and do something they would not normally do and spend some time looking inward?
Post a Comment
Read more 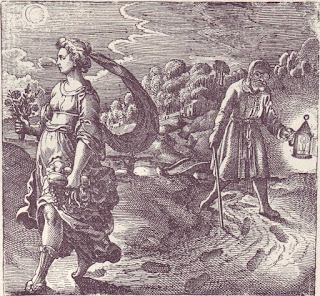 What is it? What is it, in the end, that induces a man to go his own way and to rise out of unconscious identity with the mass as out of a swathing mist? Not necessity, for necessity comes to many, and they all take refuge in convention. Not moral decision, for nine times out of ten we decide for convention likewise. What is it, then, that inexorably tips the scales in favour of the extra-ordinary ? It is what is commonly called vocation: an irrational factor that destines a man to emancipate himself from the herd and from its well-worn paths. True personality is always a vocation and puts its trust in it as in God, despite its being, as the ordinary man would say, only a personal feeling. But vocation acts like a law of God from which there is no escape. The fact that many a man who goes his own way ends in ruin means nothing to one who has a vocation. He must obey his own law, as if it were a daemon whispering to him of new and wonderful paths. Anyone with a vocation hear
Post a Comment
Read more
More posts

Gan on Jungian!
I am a practising Jungian Oriented Integrative Psychotherapist. I have a deep seated and lifelong interest in, and attraction to, the mystical, contemplative aspects of the journey and have been living as a Jungian lay contemplative for three years now.